I am a member of the Reigate Antique Society, a group that meets up once a month. Each month a different Antiques expert provides us with an exciting talk in their specialism.

For this last July’s talk we did something a little different and members were invited to talk about their own collection or something they were passionate about. I decided to speak about French Beaded Flowers as I have been enamoured with these creations since I first learned of their existence a couple of years ago.

French beaded flowers are small glass beads strung on to a fine wire and then fashioned in to various blooms. Because they are so pliable it is possible to create pretty much anything within your imagination with the use of a small number of tools and a great deal of patience. In the days before it was possible to purchase any and every type of flower from a florists, these beaded flowers provided a practical and exotic way to decorate your home, use as a wedding bouquet, or like the piece I own, used as funeral wreath or ornament. 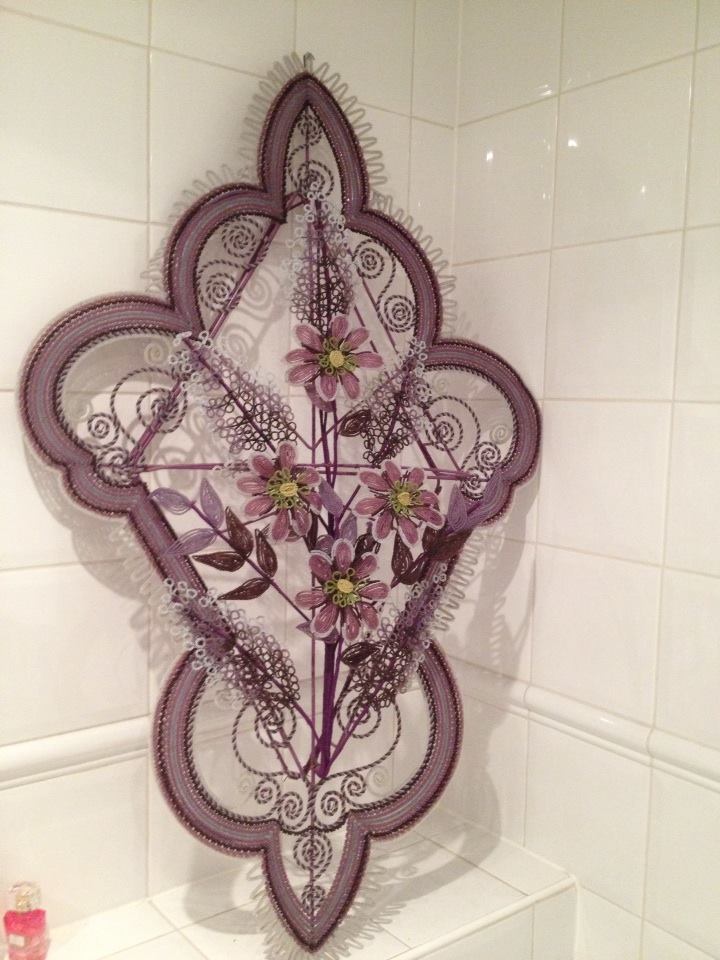 This is my beautiful beaded flower wreath in pride of place in my bathroom! Note perfume bottle for scale, it’s pretty big.

One of the reasons that flowers are associated with churches has to do with beads. In the thirteenth century a form of prayer using a string of beads was instituted by St. Dominic. The string, called a rosary, consisted at that time of 15 units of beads. Each unit contained 10 small beads, preceded by one larger one. A prayer was recited at every bead. The word “bede” (sp) is Middle English for “prayer.” Because of the length of the original rosary, it became customary to pay someone, usually a resident of an almshouse, to recite the prayers. These people were referred to as bede women or men, and it was they who made the first bead flowers. The craft was handed down through the centuries and came to be associated with the church and its decorations.

The art of making flowers out of beads is centuries old however there is very little documentation on the development of this art. Many books can be found of different flower patterns but only from about the 40s onwards.

According to references of beaded decorations, it is thought that the technique began as early as the 1300s in Germany when steel needles and wire were developed, and around the 1500s in Europe, predominantly, Italy and France. The peasants would collect discarded beads from the noble’s clothing and fashion them in to beautiful decorations. At one point there would be women sitting outside every door making these creations. In 16th Century Venice the poorer women would make money creating beaded flowers for churches, parade floats and banquet tables. I quite like the idea that they would be selling back to the upper classes their own discarded beads in banquet bouquets!

Different methods were developed over the years, the Victorian method, also known as the English or Russian method, and the French method. The main difference is that in the Victorian method, which is similar to modern bead jewelry-making techniques, the thread or wire passes through each bead twice or more, and the wire passes from row to row on the sides of the piece; in the French method, the wire passes through each bead only once, and passes from row to row in the center or on the bottom of the individual piece. I believe this makes the French beaded flowers more beautiful as they are more pliant and more life like.

Production of beaded flowers was no doubt advanced by the Industrial Revolution, which increased availability of glass beads of regular size and color. By the late 19th and early 20th centuries, beaded flowers were sometimes used in ornate funerary arrangements, where wired beads made up flowers and could also be wrapped around a metal framework. These were perfect for use during winter months when fresh flowers were not readily available, and they were long lasting without the need to be watered or replaced. The Victorians are most likely responsible for the introduction of the French beaded flower funeral wreaths as they fit perfectly in to the elaborate mourning rituals inspired by Queen Victoria’s grief over the death of her beloved Prince Albert. This type of artistic expression of mourning would have been popular along with the jewelry items holding a lock of the deceased’s hair which we have heard about in previous talks. The mourning wreaths would be in muted purples and blues, like the one I have brought along today.

After the Second World War beadwork of this kind gained its greatest popularity, with instruction kits being sold complete with materials and patterns, and department stores such as Marshall Fields and Bloomingdale’s sold beaded flowers imported from France. Famous French beaded flower owners include Marie Antoinette and Princess Grace.

Virginia Nathanson helped introduce this craft to a new audience and codified the technique in 1967 with the publication of her book The Art of Making Bead Flowers and Bouquets. She herself had purchased a bouquet of beaded flowers in a department store and took it aprt in order to understand how it was put together and began making them herself. Nathanson advocated beaded flowers for sale through mail order because of their “indestructible” nature. Testament to this is my own piece which was brought back from the South of France and has travelled around with me with no trouble. If it ever looks like the petals are drooping you can just rearrange them.

More recently French Beaded flowers were used to make wreaths commemorating 9/11. With the help of the internet many beaded flowers makers contacted each other and all worked towards creating these large scale pieces, sending a flower or section of wreath from all over the world. These are currently on display in the National September 11 Memorial Museum in New York which earlier this year.

Another exciting contemporary project which used french beaded flowers was commissioned by the Swarovski Crystal company. In order to showcase their line of crystal beads they had a collection of beaded flowers made.

Value wise I am not sure monetary value of these pieces, obviously the Swarovski ones would be worth a fair bit but as Jean rescued the piece I own from a skip! I am not entirely sure of pricing.

It seems as though the craft is gaining a lot of popularity recently with people making their own bouquets and even this Hawaiian Garland. Each flower is hand-stitched, one tiny seed bead at a time, taking over 100 hours and almost 35,000 beads to complete.

Having recently purchased a book on the techniques to arrive so watch this space for my creations! I want to create something typically ‘masculine’ out of these beautiful, delicate flowers and am currently working on a wrestling championship belt!!

One thought on “French Beaded Flowers”